As my three sisters and I were dividing my Mother’s things, we have discovered a number of items belonging to grandparents and great grandparents.  The items have been a variety of things from every Christmas card and every bank statement from many years back to personal items such as wedding rings or class rings.  We very carefully are going through each piece finding some trash but mostly a lot of treasures.  These include old pictures dating back many generations, a dollar bill wrapped in a napkin secured with a rubber band from my Grandmother, canceled checks from 1942, old war ration stamps, notes my Mother wrote Daddy, notes my Daddy wrote Mother and the list goes on and on.

Because we all have precious memories of times past dividing things up has taken a lot of thought and cooperation on the part of all of us.  Some “things” mean more to one sister and other “things” mean more to another.  The things we all wanted became a challenge and in the spirit of fairness, we lumped them together and drew by number for the treasures we would take home. 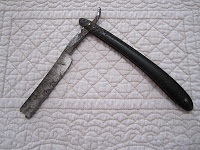 Part of this process resulted in an old rusty straight razor coming into my possession.  There were four up for grabs and being the oldest I placed the four in my hand and offered the others a choice.  They selected the ones they wanted and I took what was left.  It was an old, ugly, rusty, straight razor and there was no pearl handle and parts were missing.  I really didn’t see much value in it other than it had belonged to someone in the family.  I thought, “That’s ok, its just “stuff” and it really doesn’t matter.”

Part of cleaning and sorting also included the stacks and stacks of genealogy books my Mother and Dad compiled of relatives and generations past.  While I have not completed this task, I have a beginning.  As I was going through the genealogy information, I came across a forgotten story told by my Grandfather.  He mentioned a razor passed down from father to the oldest son.  This razor brought from Ireland had been in my Grandfather’s possession since he had been the oldest son.  Could this razor be “the one”?

I examined the razor carefully.  There appeared to be letters engraved on the blade.  Using a magnifying glass, I was able to read the words “George Worstenholm” and “IXL”.  After a Google search, I discovered this razor had been made in Shuffield England about the time my ancestors would have lived in Ireland.  Perhaps this razor really was that razor that had “special” meaning for my family and was the one they brought to America.  It no longer was a rusty old razor with no value.  Suddenly it had great value to me.

The same is true with the cross of Jesus.  At first glance, the cross was an instrument of execution and death that caused extreme suffering with bloody and wretched pain.  Since it was used for the worst of criminals it was associated with punishment and shame.  The people of Jesus generation would have considered the cross with horror and disgust.  They would have seen nothing of value in it.  Had Jesus not performed this sacrifice for our sin, we would have also regarded it in the same manner.

Only on closer look at the cross where Jesus died do we see the value and significance of such an ugly thing.  It was through this torturous instrument of death that Jesus provided the ultimate sacrifice for me and you.  He was the perfect sinless Lamb of God that bore all sin so we didn’t have to.  He made eternal life possible if we will repent of sin and accept Him as Lord and Saviour of my life.  Now the ugly, shameful cross has become very precious to me because I know what it represents-much more valuable than anything…even a special razor.