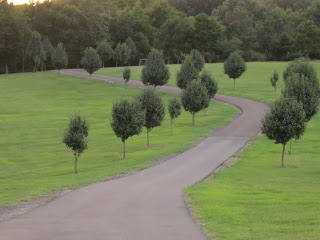 We were expecting our second grandson to make his appearance any day.  My first born grandson was so excited about the coming event that the anticipation was almost more than a two year old could bear.  As the blessed event drew closer and closer, every day he would ask, “Is it time yet?  Is it time to go get my baby brother?”

The day before his arrival my grandson and my daughter were at my house for a short visit.  Over and over, my grandson kept asking “Is it time yet?  Is it time to go get my baby brother?” My daughter knowing that the next day was when the new baby would arrive, she said, “Yes, it’s time.”

Excitedly, he grabbed the baby stroller and headed down my driveway.  Usually, he only went a short distance down the drive and then turned around and came back.  Not this day.  He kept going further and further.  When I realized that he was not going to turn around, I ran after him.  I asked him where he was headed and he replied firmly, “I’m going to get my baby brother!”  There was no persuading him for he was determined to reach his final destination and retrieve his brother.

We reached the top of the hill with stroller full speed ahead and because the road and danger was a short distance ahead, I picked him up in my arms and turned around headed back to the house.  His little heart was broken and he cried and cried.   In his reasoning, the baby brother he wanted was now out of reach and as far as he knew that was his last hope.

As I reflected on this experience, I thought about how determined we are to head toward the way we think best in order to make our desires become a reality.  We trudge toward the end thinking we will get what we want regardless of the personal cost.  Often the Lord waits for us to turn around on our own and when that doesn’t happen, He picks us up and delivers us from the unrecognizable danger.  We cry and cry with broken hearts because we can’t have what we so desperately wanted.  The God of the universe in His infinite wisdom gives us exactly what we need according to His plan and in the way that brings Him glory.  He provides exactly what we need the moment we need it.