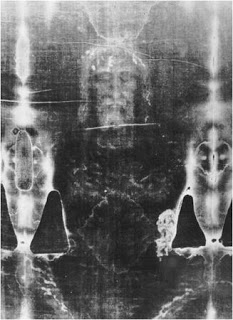 The Shroud of Turin has long been controversial.  Was it the burial cloth of Jesus?  Could it answer questions about Jesus and prove that He lived and died the way the Bible says? This 14 foot linen cloth of herringbone weave has undergone numerous test from critics over the centuries.  It was first photographed in 1898 by Secondo Pia.  The result was a surprise image when his negative revealed clear facial features never observed with the naked eye.  In 1970, a team of scientist found the markings on the cloth were consistent with a crucified body and the stains were real human blood.  The cloth reveals blood from a wound on the side, lacerations on the back and front showing the man was scourged, blood stains on the head and blood from the wrists and feet consistent with nail punctures.

In 1988, scientists removed a piece of cloth and tested it with radiocarbon testing.  Three independent labs concluded the date to be between 1260-1390, however, some say the samples were taken from the edge of the cloth placed around the edge to protect the delicate linen somewhere during the middle ages. It has been proven that the image was not painted on the cloth. In March 2010, researchers unveiled a revolutionary radiocarbon dating method that could allow scientist to establish accurate ages of artifacts without damage to the cloth.  Hopefully, there will soon be a more precise estimate of the Shroud’s true age.

The Catholic Church has protected the Shroud over the centuries and for the first time in ten years  the shroud will be on public view from April 10 to May 23.

Recently, the History channel aired a program called “The Real Face of Jesus”.  This program was the result of a year’s work by a team of graphic experts.  Their purpose was to take the image from the cloth and using 3D software create a life like image of the man on the cloth.  It was amazing to see the results.  Was the image on the cloth that of Jesus?  Did they produce an image of what Jesus actually looked like? If you believe that the shroud is indeed the burial cloth of Jesus, then you would say yes.  If on the other hand, you do not believe the shroud belongs to Jesus, then you would say no.  To see for yourself, go to the following websites:  http://www.history.com/shows/the-real-face-of-jesus
http://www.youtube.com/watch?v=jLEM2qb-Vlg
http://abcnews.go.com/GMA/video/real-face-jesus-10238292
http://abcnews.go.com/GMA/video/face-jesus-revealed-10248139&tab=9482931&section=4765066&playlist=&page=1

Does it matter wither this cloth is the actual burial cloth of Jesus?  I agree with one lady interviewed by ABC news when she said, “It doesn’t matter how He looked.  It’s what He did that counts.”