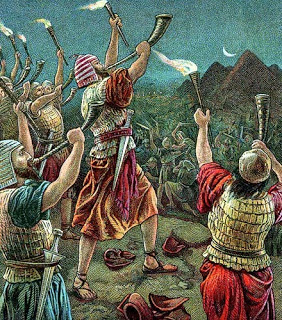 The account of Gideon in the book of Judges tells about an enemy that was threatening to destroy Israel.  The enemy had so many men ready to annihilate the Israelites that the Bible describes them as thick as locusts with camels that could not be counted any more than the sand on the seashore could be counted.  The men were terrified of the enemy.
Then God did something unusual.  He told Gideon to send all but 300 of his 32,000 men home. These 300 men would fight the enemy.  What was God’s purpose for this? Judges 7:2 states “In order that Israel may not boast against me that her own strength has saved her”.  As humans, we have a tendency do things in our own strength rather than His and then boast about how “we” were able to win the victory. What happened next could only be from God’s provision for His people.  Against overwhelming odds-when the people of God put their faith and trust in Him-something miraculous happened.

1. God gave a promise: He told Gideon that He would give him victory over his enemies.

Judges 7:9  During that night the LORD said to Gideon, “Get up, go down against the camp, because I am going to give it into your hands.

2. God gave encouragement: God sent Gideon into the enemy camp to listen to what they were saying.  In obedience, Gideon and a servant named Purah went to spy on the enemy and overheard a dream and interpretation of the dream.  The dream predicted victory for the Israelites and it put terror into the hearts of Israel’s enemy.  When Gideon heard the dream interpretation, he was encouraged and worshiped God.

Judges 7:9-15  10 If you are afraid to attack, go down to the camp with your servant Purah 11 and listen to what they are saying. Afterward, you will be encouraged to attack the camp.” So he and Purah his servant went down to the outposts of the camp. 12 The Midianites, the Amalekites and all the other eastern peoples had settled in the valley, thick as locusts. Their camels could no more be counted than the sand on the seashore. 13 Gideon arrived just as a man was telling a friend his dream. “I had a dream,” he was saying. “A round loaf of barley bread came tumbling into the Midianite camp. It struck the tent with such force that the tent overturned and collapsed.” 14 His friend responded, “This can be nothing other than the sword of Gideon son of Joash, the Israelite. God has given the Midianites and the whole camp into his hands.” 15 When Gideon heard the dream and its interpretation, he worshiped God.

3. God orchestrated His plan.  He removed the things Gideon and his men depended on for strength in battle.  He placed fear and confusion in the hearts of their enemy. He instructed Gideon in the method of warfare he would use in battle and with trumpets, a jar with a torch inside and shouts of praise they defeated the enemy at precisely the right time.

Judges 7:16-23 Dividing the three hundred men into three companies, he placed trumpets and empty jars in the hands of all of them, with torches inside. 17 “Watch me,” he told them. “Follow my lead. When I get to the edge of the camp, do exactly as I do. 18 When I and all who are with me blow our trumpets, then from all around the camp blow yours and shout, ‘For the LORD and for Gideon.’ ” 19 Gideon and the hundred men with him reached the edge of the camp at the beginning of the middle watch, just after they had changed the guard. They blew their trumpets and broke the jars that were in their hands. 20 The three companies blew the trumpets and smashed the jars. Grasping the torches in their left hands and holding in their right hands the trumpets they were to blow, they shouted, “A sword for the LORD and for Gideon!” 21While each man held his position around the camp, all the Midianites ran, crying out as they fled. 22 When the three hundred trumpets sounded, the LORD caused the men throughout the camp to turn on each other with their swords. The army fled to Beth Shittah toward Zererah as far as the border of Abel Meholah near Tabbath. 23 Israelites from Naphtali, Asher and all Manasseh were called out, and they pursued the Midianites.

What a lesson for us!  Be willing to hear the promises God gives. We must then take the first step of faith and obey God. If Gideon had not been willing to be obedient to the Lord’s leading, the nation of Israel would have missed out on victory and the awesome blessing of seeing His deliverance for a people who believed in Him!