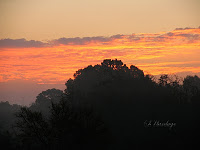 In the stillness of the early morning the whole earth seems to wait in anticipation for the grand entrance of the sun. Darkness gives way to the morning sunrise with shades of pinks, blues and yellows bursting forth as if to announce the coming arrival of the sun.  As the sun makes its way higher into the heavens its brightness dominates the sky forcing these beautiful colors to fade.  A new day begins with all its hopes and dreams.

Imagine what it must have felt like for a grieving band of disciples who watched their precious Lord hang on a cross and die. Darkness covered them. It appeared to them that evil had won and there was no hope at all. They wailed and mourned while fear grew ever stronger in their hearts thinking perhaps they too would suffer a similar fate. Darkness had a strong grip and held them tight.

The women made their way to the tomb in the still of darkness just before dawn to anoint the dead battered body of Jesus. They came with spices and ointments to what they thought was His final resting place.  As they walked down the road toward His tomb, sorrow grew stronger in their hearts. Looking into the heavens pinks, blues and yellows began to fill the sky. The sun would be up by the time they reached His tomb. Little did this small group of women understand what they were about to encounter.

The morning light revealed the tomb with the stone rolled away from the entrance. The tomb was empty and Jesus was not there. The Son had risen!

“He has sent me to bind up the brokenhearted, to proclaim freedom for the captives and release from darkness for the prisoners, to proclaim the year of the Lord’s favor and the day of vengeance of our God, to comfort all who mourn, and provide for those who grieve in Zion-to bestow on them a crown of beauty instead of ashes, the oil of gladness instead of mourning, and a garment of praise instead of a spirit of despair.  They will be called oaks of righteousness, a planting of the Lord for the display of his splendor.”  Isaiah 62:1b-3