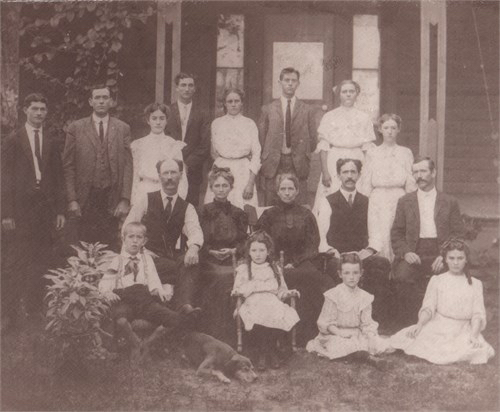 Family photo of the Taylor and Hulsey Family in DeQueen, Arkansas. Listen to the audio entitled “Buddy Tommy and His Family”

Family history is interesting.  My Mother and Dad in their retirement years started putting together bits and pieces of our family genealogy.  They successfully recorded and documented many of our ancestors and have left behind numerous notebooks full of information (so many that my sister Brenda and I divided them by family lineage).

I have treasures left behind by those who have gone before, many of which date way back to the 1800s or before.  These treasures help to tell the story of those who lived before me and how they felt and what they believed.   Such treasures included the Hales Family Bible from the Civil War era belonging to Francis Elizabeth Warren Hales and the original photograph taken of her probably in the 1890s, a crystal cake plate from my great-Grandmother Frances (Fannie) L Hales Hulsey that survived a tornado, and a straight razor from my Grandfather Clements that my sister and I disagree on its origin (she thinks she has the original but so do I) and other priceless treasures from both sides of my family.

My Mother was also diligent about recording the stories of my Grandma Agnes Frances Layfette Karr Clements and my Granny Willie Elizabeth Hulsey Johnson Ridings Miller. Cassette tape after cassette tape! I am in process now converting these tapes into digital format.  This is a long process mainly because it is a real time conversion and I do not know the number of tapes I have.  There probably are close to 75 or more! The reason for doing this is to share the lives of those who lived and loved in a time so different from my generation and the generation of my children and grandchildren.

Frances Lewellan Hales Wimpee Hulsey and William Jefferson Hulsey were both were born in Georgia, survived the Civil War, married and were widowed with children. They somehow found each other and married in 1886.  After her Mother died in 1896, Frances and William left Georgia and moved to Arkansas close to the town of DeQueen, Arkansas where her sister and husband lived.

Frances L Hulsey was my great-grandmother and she and William Hulsey each had children of their own and children together. My Granny (Willie Elizabeth Hulsey) was one of them. The audio recording above contains the voice Willie Elizabeth Hulsey telling about her big brother “Buddy Tommy” as his family called him. He was loved deeply by the family.